Official candidates for the City of Chico’s election on November 8, 2022 can be found here:  [City of Chico Official List of Candidates

The City of Chico Council is comprised of seven members each elected by district.  Citizens interested in serving on Council need to make an appointment to meet with the City Clerk in person to begin this process.  Notice of Election can be found here.  Candidate Nomination Period - Press Release

The upcoming November 8, 2022 Election will be for the selection of three (3) members of the City Council to serve four-year terms of office representing Districts 2, 4, and 6.  In addition, a vacancy needs to be filled for the original District 3, created in 2020.

Currently seated Councilmembers up for reelection include Vice Mayor Reynolds for District 2 and Councilmember Brown in District 4.  Councilmember Bennett was appointed to fill the vacancy in District 3, with the remaining two years of that term being determined at the 2022 election.  Once each election is over, the Council appoints two of its members to serve as Mayor and Vice Mayor for a period of two years.

Nomination papers were available until mid July when the official Nomination Period opens.  The next election will be in 2024.

Districts 1, 3, 5, & 7 will be determined during the 2020 election.  Please find your district in the following map.  Final District Map

The City of Chico General Municipal Election was held on Tuesday, November 6, 2018 where three seats on the Council were considered by the voters.

The City Council has added one measure to the upcoming November ballot related to term limits.

The City of Chico General Municipal Election was held on Tuesday, November 8, 2016 where four seats on the Council and three measures to amend the City’s Charter were considered by the voters. The four City Council seats were filled by Councilmembers Ory, Schwab, Stone and Mayor Morgan. The term of office commenced on Tuesday, December 6, 2016 and ends in December 2020.

The nomination period ended on August 12. While 12 individuals took out nomination papers, 11 citizens became official candidates after their signatures were certified by the County. An official “certified list of candidates with contact information is available here.

Public Review Period: Elections Code Section 13313 provides for a 10-calendar day public examination period for Candidates’ Statements. During this 10-calendar-day period, any voter of the City of Chico may seek court action to require any or all candidates’ statements be amended or deleted.

Shall Section 602 of the Chico City Charter be amended to change the time of the City Council Meeting held on the first Tuesday in December of each even-numbered year from 7:30 p.m. to 6:00 p.m.?
Impartial Analysis

Shall Section 1110 of the Chico City Charter be amended to allow for notice of intention to receive proposals for public works contracts to be provided on the city’s website or other approved methods?
Impartial Analysis
Argument in Favor of Measure O

Shall Section 1114 of the Chico City Charter be amended to permit the council to contract with a newspaper for publication of legal notices and official advertisements without advertising for the contract when there is only one newspaper of general circulation in the City?
Impartial Analysis 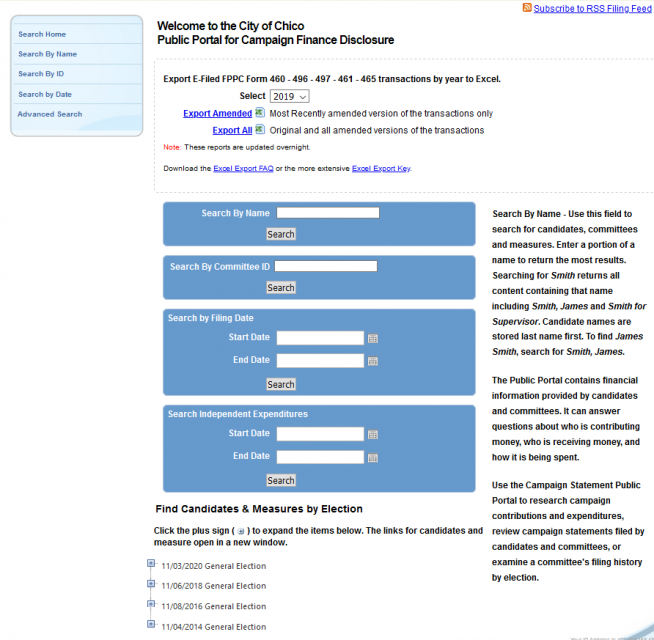 All open campaign committees and City Council candidates raising or expending $500 or more are required under the State’s Political Reform Act to file campaign statements with the City Clerk within the prescribed deadlines.