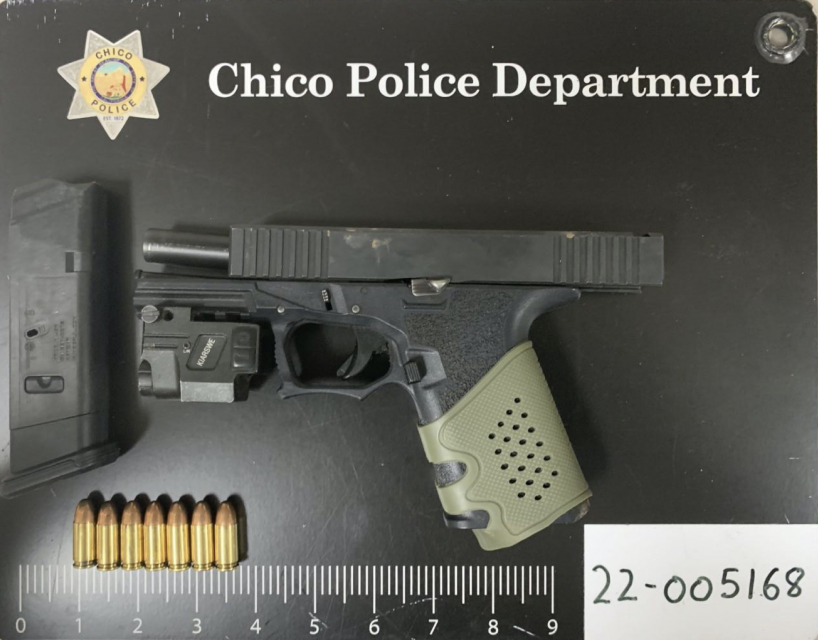 On August 20, 2022, at about 5:31 a.m., a Chico Police Officers were flagged down at the Downtown City Plaza in regards to a physical altercation. Officers witnessed two subjects involved in a physical fight near the stage area. Officers detained one of the subjects while the other subject fled the scene on foot. After a short foot chase the suspect, later identified as Christian Governor, was detained. While speaking with witnesses on scene Officers learned that Governor had discharged a firearm at another subject in the area of city plaza.

During a search of city plaza Officers located a 9 mm Glock style “Ghost Gun” and a magazine loaded with seven rounds of ammunition. A “Ghost Gun” is a handgun assembled by the end user that does not possess a serial number.

Governor was arrested for violations of sections 245(a)(2) PC-Assault with a Deadly Weapon, 148(a)(1) PC –Resisting Arrest, 29825(a) PC – Prohibited Person in Possession of a Firearm, 24610 PC – Possession of an Undetectable Firearm. Governor was later booked into the Butte County Jail.