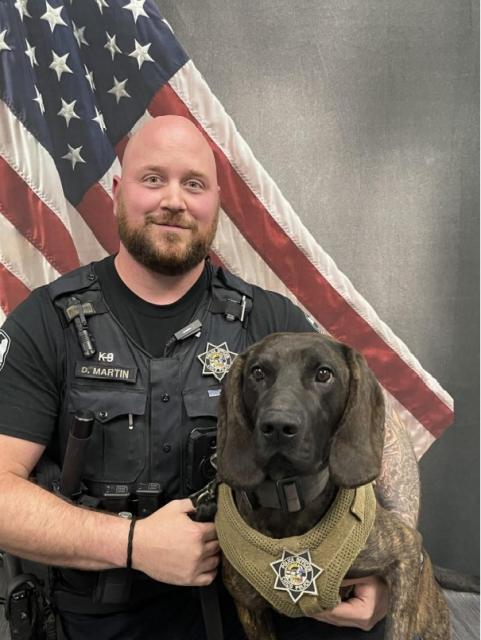 On March 16, 2022, at approximately 4:00 a.m., an employee of Dutch Bros Coffee, 480 E. Park Avenue, phoned Chico Police Dispatch to advise of a burglary at their business. Officers responded to investigate. A large window had been shattered on the side of the building. Entry had been made through the window and several electronic items had been stolen. Officers canvassed the area and located a hammer and several items of stolen property stashed in the bushes nearby.

K-9 handler Martin directed his K-9 partner (Pyro) to sniff the stolen property. After taking only a couple seconds to learn the new odor, Pyro led officers north bound away from the business. They walked several hundred yards away over varied terrain to a hotel parking lot. Once in the parking lot Pyro took a keen interest in Antonio Sandoval (age 29), who was attempting to enter a moving vehicle and flee the scene. Officers also witnessed Sandoval discard some of his clothing in an attempt to change his appearance.

Officers detained Sandoval and learned he had a warrant for his arrest. While interviewing Sandoval, officers located evidence in his possession which linked him to the burglary. Officers arrested Sandoval for a violation of section 459 PC-Burglary. Sandoval was transported to the Butte County Jail.

K-9 Pyro is the newest member of the Chico Police Department K-9 team. Pyro is a 1-year-old Plott Hound, and he is certified in single purpose trailing. Pyro has been with the Chico Police Department for only 6 weeks. We acquired him from Georgia K-9 in Edisto Island, South Carolina. K-9 handler Martin recently returned from a 3-week handler’s course, training with Pyro. He is part of a pilot program where we are evaluating the usefulness a non-apprehension dog that simply trails human scent.

We want to thank the community for their generous support of the Chico Police Department K-9 program. Community donations fund ongoing training and equipment for our K-9 service dogs. What an incredible start to this new program.