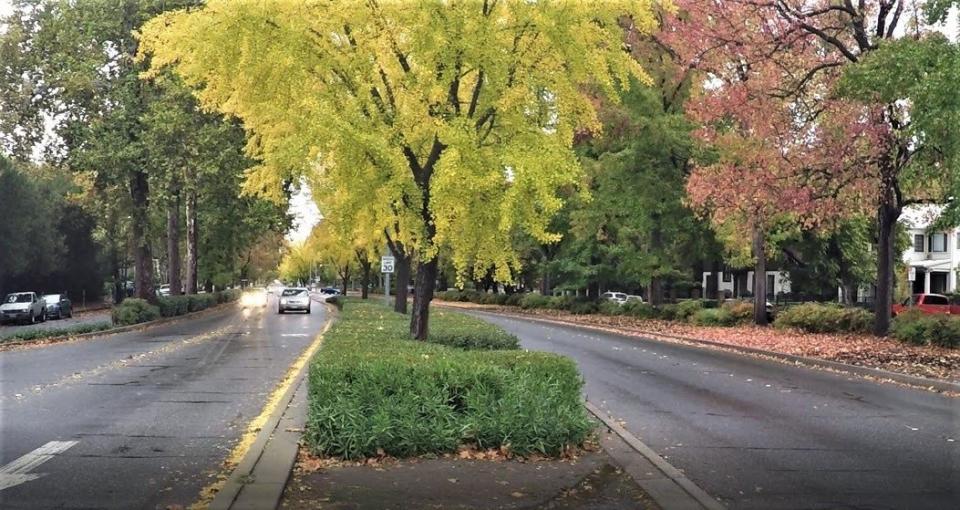 The proposed project involves various non-motorized “complete streets” improvements along the Esplanade corridor from 11th Avenue to Memorial Way and on Oleander Avenue between 10th Avenue and Memorial Way.

A separated and paved Class I multi-use bicycle/pedestrian path will be created along the Esplanade, connecting downtown; California State University, Chico; Chico Junior and Senior High Schools; a regional hospital; and neighborhoods adjacent to the existing Airport Class I multi-use path at 11th Avenue. The parallel street to the east of the Esplanade, Oleander Avenue, would also receive signage, sidewalk signal, and stop control improvements between 10th Avenue and Memorial Way.

A roundabout would be installed at the intersection of Oleander Avenue and Memorial Way adjacent to Chico Junior High School.

Appropriate Americans with Disabilities Act (ADA) ramps and sidewalks would be added.

June 22, 2020 – In accordance with the California Quality Act (CEQA), the following documents are now available for public review.

Notice of Intent (NOI) to adopt a Mitigated Negative Declaration

Emailed comments may be submitted to tracy.bettencourt@chicoca.gov

In 2016, the City of Chico conducted the Esplanade Corridor Safety and Accessibility Study (Study) in conjunction with an extensive public outreach effort to review potential transportation and traffic safety improvements that could be made to the Esplanade between Memorial Way and 11th Avenue and along Oleander between Memorial Way and 10th Avenue to improve the safety for all modes of transportation along the corridor, including pedestrians, bicycles, vehicles, and buses. The purpose of the study was to engage the public in determining a package of roadway safety improvements for this key transportation corridor in the City which that serves so many purposes and modes.

The study addressed traffic safety and operational concerns, including the enhancement of the corridor with “complete streets” features through the provision of additional facilities for bicyclists and pedestrians, while maintaining the integrity of the “Boulevard” design, community character, and maintaining traffic flows for vehicles. Ultimately, the study resulted in recommended improvements which were reviewed and considered by the City Council. Upon Council approval of the preferred package of proposed safety and operational improvements, the City applied for and was awarded approximately $7 million in federal Active Transportation Program (ATP) and Congestion Mitigation and Air Quality (CMAQ) funding. The City is currently in the process of conducting the environmental review in advance of final engineering design for the project.