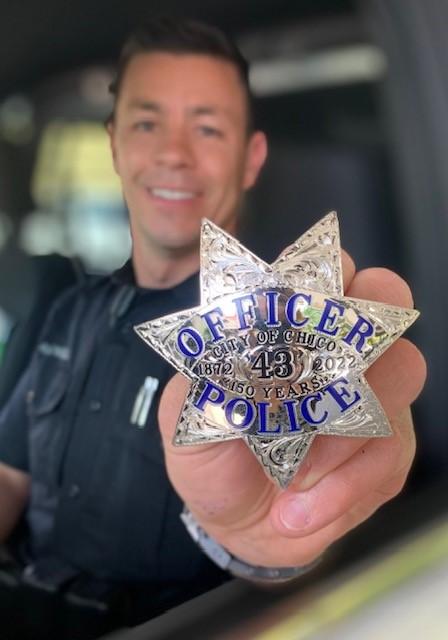 Today marks the start of the 150th Anniversary of Chico Police becoming an incorporated municipal police department.  We are very proud of the men and women who have come before us to create such a wonderful organization.  In honor of this anniversary, we have created a new badge which was taken from designs of one of the original badges.  We would like to thank our community sponsorships for making this dream of an anniversary badge come to fruition.  Please take a close look at the new badges and you will find they are very professional and historical in appearance.

“The Town of Chico was incorporated on February 14, 1872 and the Police Department was established on the first Monday in April 1872 with the first Town Marshall named, James O. Weed.  Following the Town Marshall two “Policemen” were selected by the Board of Trustees; Benjamin F. True and W. A. Taylor.  During the same meeting, a committee was selected and $2,000 was allocated for the building of a new town jail. Law and order was well on its way in our little town.”

We thank our community we serve who places great trust in their Police Department.  Without the trust of the community we serve, we could not be effective at providing quality police service.  Please join us in celebrating this milestone anniversary and let us know how you like the new badges!