The 2021 Annual Road Rehabilitation Project proposes to implement safety and accessibility improvements along Park Avenue from East 9th Street to East Park Avenue and along Pine, Cypress, and Mulberry Streets from 9th Street to 20th Street.  The proposed improvements include grinding and paving, new striping, new lighting, ADA curb ramps, and bike lanes. Additionally, Hemlock and Locust Streets, between and through 12th Street and 20th Street, would receive a slurry seal paving treatment. 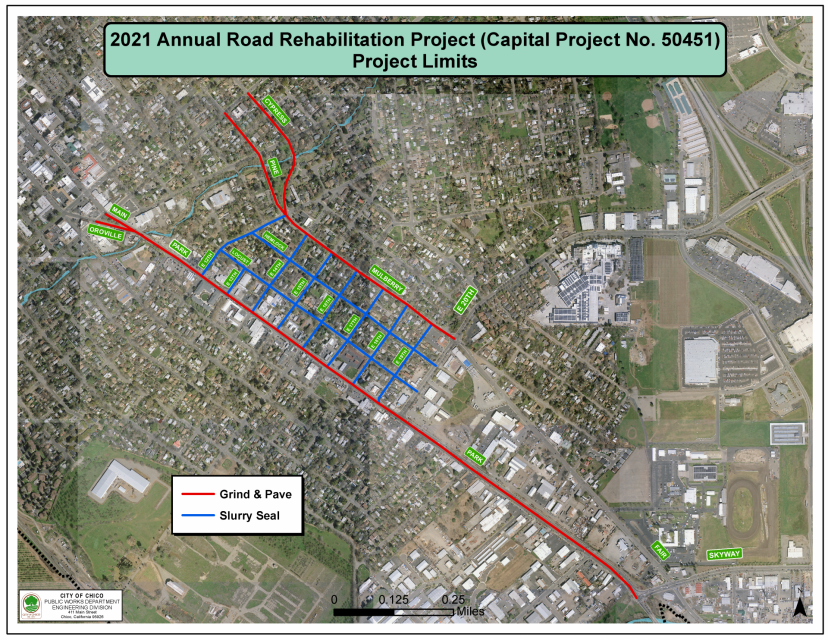 There are three components to this project:

As part of the 2021 Annual Road Rehabilitation Project, the City will be incorporating ‘Complete Streets’ improvements to enhance the safety of the corridor for all modes of transportation (e.g. motor vehicles, bikes, pedestrians, and transit).  These improvements will include drive lane reconfigurations between 9th and 20th Streets.  The City is considering two alternatives (see Alternative A and Alternative B below).

To assist the City in determining the community’s needs, we invite you to take the following survey.  The results will be considered by the City’s Internal Affairs Committee at their November 2 meeting.  The survey will remain open until October 26, 2020.

Alternative A would remove existing on-street parking from both sides of Park Avenue to accommodate space to implement bike lanes and a center turn lane.

Alternative B would remove on-street parking from the east side of Park Avenue to accommodate space for bike lanes.  No center turn lane would be installed in
Alternative B.

Pine and Cypress Streets from East  9th Street through Mulberry Street to East 20th Street would receive ‘Complete Streets’ improvements.  Existing parking would be removed from the west side of Pine Street and the east side of Cypress Street, from 9th Street to Humboldt Avenue, to accommodate the proposed bike lanes.  Grinding and paving will occur on all streets.

Hemlock, Locust  Streets, between and through 12th Street and 20th Street

Side streets between Mulberry Street and Park Avenue, from East 12th Street to East 20th Street, will receive a slurry seal paving treatment.  Class II bike lanes would be implemented along 12th Street.